It’s Time for Another Jesus Movement

“But when the right time came, God sent his Son, born of a woman, subject to the law. God sent him to buy freedom for us who were slaves to the law, so that he could adopt us as his very own children.” (Galatians 4:4-5 NLT)

The Jesus Movement (or the Jesus Revolution, as Time magazine described it) calls to mind long-haired kids in sandals, beads, and bell bottoms. We remember how bad things were in the late 1960s and early 1970s, but God heard the prayers of His people and sent a great spiritual awakening. In fact, many believe it was the greatest spiritual awakening in American history. We need to see that happen again.

We find parallels between the spiritual and cultural climate of today and the days of the first Jesus Movement. But this wasn’t the Jesus Movement of the 20th century. It was the movement that Jesus started after His crucifixion and resurrection.

The mighty ancient Rome had pretty much beaten the world into submission and ruled with an iron fist. Things were very dark morally and spiritually. Immorality ran rampant. If you were to visit a city in the ancient Roman Empire, you’d find thousands of prostitutes roaming the streets, looking for people to prey on.

If that weren’t bad enough, there was open idolatry, spiritism, and demon worship. The religious establishment was also almost completely corrupt. The time was right for divine intervention. So the people at that time saw the first Jesus Movement. Jesus Christ Himself appeared on the scene and began His public ministry, fulfilling hundreds of prophecies in the Old Testament.

Today, the Church marches on. Persecution didn’t weaken it but strengthened it. Ultimately, persecution caused the Church to spread out to other parts of the world, proclaiming the gospel. The mighty Roman Empire was reduced to ruins, but God is still at work on Earth today through the followers of Jesus Christ. 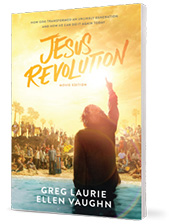 In thanks for your gift, you can receive  Jesus Revolution.

Discover how God transformed an unlikely generation . . . and how He can do it again today! This book, soon to be released in the form of a major motion picture, is our gift to you in thanks for your support in the month of January.

This content first appeared on Crosswalk.com and is used here with permission. To view the original visit: https://www.crosswalk.com/devotionals/harvestdaily/greg-laurie-devotion-september-20-2022.html