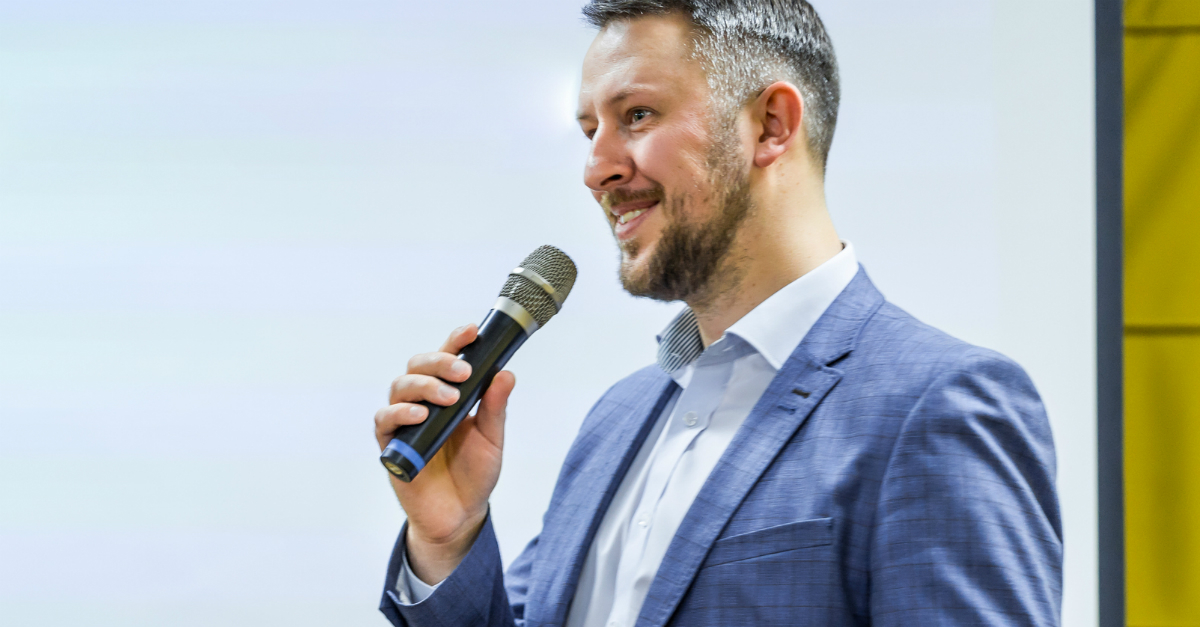 Now a confession. I was never afraid to stand in front of a group and speak. In fact, quite the opposite.

In our little West Virginia schoolhouse, teacher Margaret Meadows would invite her fourth-graders to share a story they had read recently. I recall Violet Garten (love that name!) was so good at it. But when she called on me—the kid frantically waving my hand—I walked to the front of the class and broke the rules.

I did not tell a story I had read somewhere.

I made one up on the spot.

That is serious something or other. Self-confidence, maybe? (Yeah, maybe self-confidence on steroids, I can hear someone say, lol).

When friends tell me they dread public speaking—that they would rather take a whipping than stand in front of a group and speak about anything—I’m speechless and cannot begin to identify. That’s why I did something.

I asked Facebook friends who dislike public speaking to tell us why.

Most of the responses boiled down to variations on one theme: fear.

They feared forgetting their speech in the middle of their presentation, dreaded being rejected by the audience, were afraid of boring them, or felt they would be an outright failure.

Several dislike the attention being on themselves. One or two are intimidated by crowds. One feared tripping while ascending the steps to the podium.

What follows is my response.

Keep in mind that “overcoming fear of public speaking” is a full industry involving expensive conferences and personal counselors. But quick answers to deep problems? Hey, it’s my spiritual gift!

The Best Way to Overcome Fear

To overcome any fear, look it in the face and do the very thing that is frightening you. If it’s a fear of flying, then book a flight today. If you fear heights, then climb the next forestry tower you meet (with the permission of the ranger), and sit outside on the steps for 15 minutes. If you fear door-to-door witnessing, ask your pastor for some flyers on your church and distribute them throughout your neighborhood.

As a new student in seminary a long time ago, we were given a choice of assignments including hospital visitation, homeless ministry, or children’s work in one of our mission centers. I chose street preaching in the French Quarter. The very thought of standing on a street corner preaching frightened the daylights out of me. Therefore, it was what I should be doing. And I did. I never learned to love it, but I did become comfortable doing it.

Cartoonist Charles Schulz had a lifelong fear of flying. Yet, once a year he scheduled a flight somewhere. He explained, “If you give in to fear, it grows. Soon, I would be afraid to leave my house. Eventually, I couldn’t leave my room. We have to work against fear.”

With that in mind, here are seven suggestions to overcome the paralyzing fear of public speaking:

Know what you are talking about inside and out, even if you are going to share only a sliver of what you have learned.

Remember those dreams where you walk out on stage without any clothes? We’re told this is the fear of doing something for which we are unprepared.

The proper response, when asked to speak on a subject outside your comfort zone, is to say, “Thank you, but no.” It’s amazing how liberating that can be. In the same way, speaking on a subject dear to your heart can be energizing and empowering.

One way to spot an unprepared speaker is by the number of "you know" is uttered. The speaker's brain is feverishly trying to wend its way through the jungle of words and ideas and possible answers assaulting it and a “you know” is one of several ways it stalls for time while choosing what comes next.

In former days, preaching books encouraged pastors to write out their sermons, leaving the impression that writing was all the preparation they required for the big moment. Then came along Clyde Fant with Preaching For Today, in which he said preaching is an oral event, not written, and that the preacher should practice his sermon aloud, again and again, until he had it straight in his mind. That book changed forever how I prepared to preach.

Practicing a sermon out loud identifies areas where the speaker is unclear and needs to do further study. It could also show him where he’s spending too much time and where not enough.

One more thing. Speaking the message aloud (even if very quiet) prepares the tongue and lips for forming those sounds. One reason people stumble over certain words is they find them unfamiliar, a situation for which oral practice is the antidote. (That’s a big reason for rehearsing Scripture aloud a number of times before reading it in a worship service.)

3. Plan Your Takeoff and Your Landing

This will increase your confidence.

As a retired, traveling preacher, there is no way to prepare for the situations I will encounter in the various churches: to know how many will be present, their frame of mind, where they will be sitting, the configuration of the auditorium, the acoustics, all that has gone before me on the program. There is no point worrying about what I cannot control.

What I can do, however, is take care of my part. I can be well-prepared.

Even though I’ve preached thousands of sermons, I do not wing it. I walk into the pulpit knowing what the first five minutes will be like. I know how I’ll introduce the subject, how I'll call their attention to the text, what I’ll say while they’re finding the scripture, and then for the opening of the sermon itself.

The one thing I do not try to plan in advance, but wait for the actual service to decide, is the opening sentence or two. Shall I mention the last time I preached here? or comment on the choir special that preceded me? Or greet a few old friends in the congregation?

You can bet that I ask the Lord to guide me on these, also. When a speaker walks to the podium, he has the full attention (and even the goodwill) of his hearers; he mustn’t squander it on foolishness or silliness.

As you begin to speak, Pastor, you have the full support of your hearers. They want you to do well, since no one wants to feel they have wasted their time in coming today.

Now, give as much attention to the conclusion of your talk/sermon. This is harder—unless you are a preacher. The sermon should always conclude by calling people to act on what you have preached. Otherwise, a good rule to follow is to relate your message conclusion back to something from the introduction.

You should always know where you are going with your message, or you will end up somewhere else.

A simple outline (the plan or recipe for your speech or sermon) will be more easily kept in your mind than a complicated one. I suggest you have your main points on a card or some kind of note, and keep it handy just in case your mind goes blank. That happens to the best.

Don’t burden your message with too many details, too many quotations, or too many scriptures. Do not feed your audience so many stories they forget the point you were trying to make. Likewise, do not throw too many points at your hearers.

You should be able to state the gist of your sermon/speech in one fairly simple sentence. Haddon Robinson called this your “one big idea.”  This article is saying: “You can overcome your fear of public speaking.”

Once you’re ready, do not rehearse anything for several hours before you are to speak.

There is such a thing as being overly prepared. You can cram your mind so full of plans and points and reminders that when you rise to speak, you will lose all thoughts of your audience and stress yourself out trying to recall everything.

Accept that you may well leave out a good point or a great story. It won’t be the end of the world. Even the best speakers and preachers do that. So, cut yourself some slack. You will not do a perfect job, no matter how hard you try. You are a flawed human, and will not attain perfection in this life. You’ll do better next time.

If the audience sees that you are enjoying yourself, they’re more likely to relax and have a good time, too. So, smile at them. If something is funny, laugh at it.

I was guest-preaching in a Kentucky church. As I began my message, I spotted some old friends in the congregation, walked right off the platform and up the aisle, and introduced them, gave them hugs—the congregation applauded to welcome them—and then returned and went on with my sermon.

Now, that is relaxed! It was clear to the congregation that I was glad to be there and determined to enjoy the experience.

6. In the Middle of Presenting, Don't Ask Yourself “How Am I Doing?”

This is not a performance. You are sharing something life-giving to people who need to hear this. The Heavenly Father is using you to bless people.

This is not about you. You are only the messenger, not the message.

Do not pause in your talk or sermon to critique yourself, and try not to do it afterward either.  When you are exhausted and spent (because after unloading all the stuff you brought today you will feel like a deflated balloon) is not the time to analyze how it went over, where it worked, and where it didn’t. Save that for another time.

Early in the ministry of Billy Graham, he began to be the subject of front-page newspaper articles.  Celebrities began attending his crusades. In New York City, he had announced his intention to preach on judgment and hell.

The temptation came very strongly to me that maybe I should switch to another subject. Mr. Luce (the publisher of Time and Life magazines) was a New York sophisticate. It seemed to me to be the least likely way to win his favor. Then, the Lord laid Jeremiah 1:17 on my heart. ‘Speak unto them all that I command thee; be not dismayed at their faces, lest I confound thee before them.’ It was as if he was saying to me, ‘If you pull your punches, I’ll confound you. I’ll make you look like a fool in front of men!’” (from Billy Graham: God’s Ambassador, by Russ Busby)

Aim to please the Heavenly Father and let Him take care of the rest.

This content first appeared on Crosswalk.com and is used here with permission. To view the original visit: https://www.crosswalk.com/blogs/joe-mckeever/tips-to-overcome-the-paralyzing-fear-of-public-speaking.html